We are running our 2nd event on Wednesday 26 May 2021 – to book your space click here – Special rates when booking 2 or more spaces.  Request a booking Form by emailing marketing@fatc.co.uk 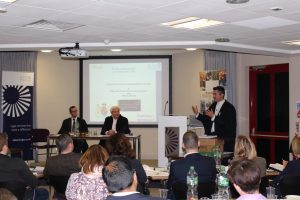 Tom devised  a true to life scenario that those in attendance could relate to, and this was confirmed a success from the positive feedback received.

“One of the best delivered courses I’ve ever attended. Very informative and a good Q&A time.”

The event  was opened with Dr Hazel Gowland who gave us her personal experiences, and some hard facts on the increases of allergies, and how the allergens which are affecting us are changing, through to past experiences and the lessons learnt.

Next up was Lynne Regent, CEO of the Anaphylaxis Campaign.  Lynne spoke about recent high profile cases highlighted in the media including the tragic case of Natasha Ednan-Laperouse aged 15, who died after eating a baguette that was prepacked for direct sale at Pret a Manger, Heathrow Airport before boarding a flight on 17 July 2016. We heard how Pret were warned on numerous occasions because of near misses, but chose not to make changes.

Both Lynne and Hazel were able to set the scene prior to the Mock Trial to give the human factor to the proceedings.

The company Baby Basiletti’s pleaded guilty to the three charges when they were brought against the company.  However, Mr Basiletti as director of the company pleaded not guilty until the day of the trial, and as such the trial changed to a sentencing hearing. 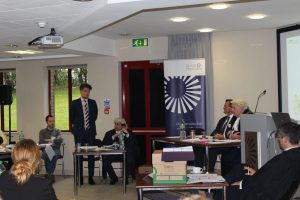 The room was set up as a full court room with members of the Blake Morgan team taking on the roles of the prosecution – Tom Walker, Senior Associate Barrister at Blake Morgan and Mark Jones, Legal Director at Blake Morgan –  acting as the Court Clerk. The defence barrister was Stuart Jessop, from Six Pump Court Chambers, Stuart is a specialist regulatory and public law Barrister. Much of his work involves Food Law, including food Safety and hygiene, allergens, food labelling, food information and related areas. And Bradley Albuery, Partner at Blake Morgan taking the part of the Judge.   Formalities were in place when everyone was upstanding on the judge’s entrance!

The audience were asked to take on the role of jurors, and as Mr Basiletti pleaded guilty it was explained to them that they would be able to assist with the sentencing as appropriate for each charge.

The jurors, in groups of five, were given evidence pertaining to the charges in the form of handouts. They were also given the Definitive Guidelines for Health and Safety Offences, Corporate Manslaughter and Hygiene Offences for England and the UK – prior to starting the jurors were given time to review the documents to enable them to make an informed decision for the outcome of the case.

Although there were procedures in place and an allergy policy at the restaurant, it was clear from the outset that the training was not sufficient to ensure that these documents were adhered to.

The Case in Hand

The case was based on Baby Basiletti’s promoting that they provide ‘Allergen Free’ dishes and Ruby Denver, who was taking her family out to celebrate a 50th birthday with her two teenage boys, one of whom had a sensitivity to gluten and peas, and the other of whom had a severe nut allergy.

In summary, Ruby’s son with the nut allergy was served the pasta dish with cashews and the other son with a sensitivity to gluten and peas was served the recalled pasta containing gluten.  Fortunately, the nut allergic son did not eat his pasta and was warned by his sibling and this was a near miss which could have ended in tragic circumstances.

The court took into account the company’s policy and procedures, including the documented training by their staff and colour coded equipment.

Guidance available to the Jurors

It was highlighted in the guidelines that there are nine steps to take into account when sentencing.

STEP ONE: Taking into account the charges, the jurors were asked to look at determining the offence category:

The jurors were then asked to consider the potential harm level from Category 1 serious adverse effects on individuals including where supply was to groups of high risk, Category 2 medium risk and Category 3 low risk

STEP 2:  It is a requirement to focus on the organisation’s annual turnover to reach a starting point for the fine, and further adjustments are considered within a category range for aggravating and mitigating features.  The jurors were given the range of fines appropriate dependent on the size of the business turnover and taking into account the culpability and risk.

STEP 3:  – check whether the proposed fine based on turnover is proportionate to the overall means of the offender.

STEP 4: – consider other factors that may warrant adjustment of the proposed fines.

STEP 5: consider factors which indicate a reduction, such as assistance to the prosecution.

STEP 6: – reduction for a guilty plea.

STEP 7:  compensation and ancillary orders – the court can issue a prohibition notice, ensuring the defendant cannot run a food service business in the future and if compensation should be awarded as appropriate.

STEP 8:  – totality principle: if more than one offence, consider if the total sentence is just and proportionate, in line with ‘Offences Taken into Consideration’ guidelines.

STEP 9: reasons: Section 174 of the Criminal Justice Act 2003 imposes a duty to give reasons for, and explain the effect of, the sentence.

There was much discussion amongst the jurors and it was highlighted by Hazel Gowland from Allergy Action that, had this been an actual trial there would have been much more evidence produced and a deeper look into all the circumstances that occurred on the day, there was a hung jury split between ‘high risk’ and ‘medium risk’, with a few electing to go towards ‘very high risk’ due to the potential risk of anaphylaxis and possible death of Ruby’s son who had the nut allergy.  Had he not been on his mobile phone at the time of the food being delivered!

The trial included much court room banter, with the judge intercepting at key points to highlight areas of interest for the jurors and to keep the defence and prosecution in check when they stepped out of line!

Attendees were from all sectors of the hospitality industry including: education catering, wholesalers, trainers and consultants, public house sector, restaurant chains and contract catering, to list

but a few.  Feedback from the day was extremely positive and some of the outcomes that were highlighted included:

The Mock Trial indicated the importance of an allergy policy both internally and externally for food business, accurate allergy tables and ensuring staff are trained to an appropriate level commensurate to their role to ensure they comply with the businesses allergy policy.  Its great to have a system in place but all staff need to know how it works and their personal responsibility under the law.

What people said about the event 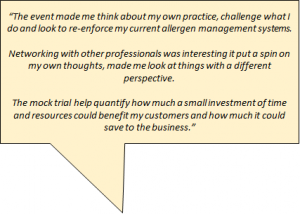 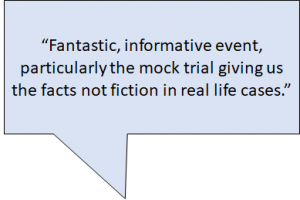 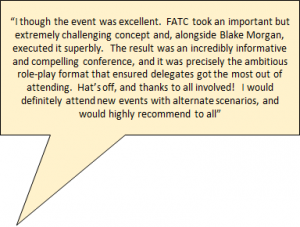 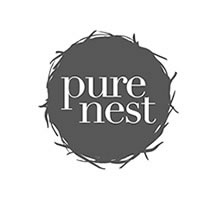 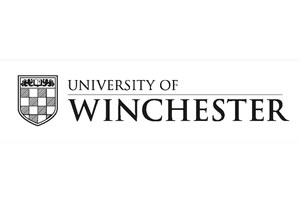 Sign up to our newsletter to receive our latest news.

Register For Our Emails

Top Tips for the Party Organiser!